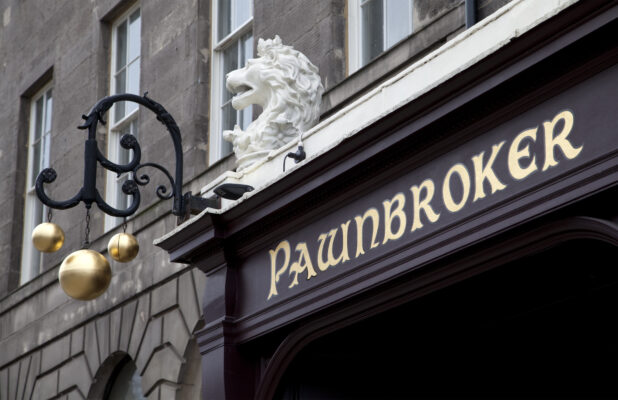 Pawnbroking is not a new practice nor does it appeal to just one social class. As humankind’s oldest financial institution, pawn loans can be traced back at least 3,000 years to ancient China as well as early Greek and Roman civilizations. During the 14th Century, King Edward III of England is said to have frequented pawn stores in Europe. Queen Isabella is reported to have pawned her royal jewels to finance Christopher Columbus’ voyage to the New World.

Traditionally, the pawnbroker’s symbol is three gold spheres hanging from a bar. This stems from St. Nicholas, often referred to as the patron saint of pawnbroking. He is reported to have left three bags of gold so the daughters of a poor man could afford to marry, thus saving them from a life of slavery or prostitution. Later the tradition transformed the bags into three gold balls, which became the symbol of pawnbrokers.

In today’s society, many people depend on pawnbrokers to help them meet daily financial needs not offered by other institutions. Pawn customers represent the working families of America who periodically experience an unexpected need for short-term funds. Pawn loans keep the electricity on, the rent paid and cars running with full tanks of gas.

Today’s pawn stores are attractive, welcoming places to do business. Most of them are family-owned and operated stores that offer superb customer service.
Pawnbrokers comply with all federal, state and local regulations and laws. In most jurisdictions, they provide local law enforcement with data on all transactions on a daily basis.